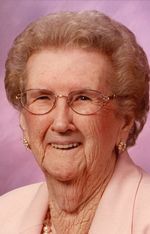 Zella E. Docherty, 97, of Aledo, formerly of Edgington, died Monday, Feb. 16, 2009, at Aledo Rehab and Health Care Center. Memorial services will be at a later date. Dennison Funeral Home, Aledo, is handling arrangements. Memorials may be made to Beacon of Hope Hospice or Edgington Cemetery. She was born June 2, 1911, in Brown County, Kan., the daughter of John and Gertrude Baker Guinn. She married Donald Docherty Dec. 24, 1931, in Rock Island. He preceded her in death in 1985. Zella was the telephone operator at the Edgington Telephone Company for 16 years during the 1950s and 1960s. She later worked at Comfort Harbor Nursing Home, Milan, and as a home health care attendant in the surrounding community. Mrs. Docherty had also worked for the Rock Island County Clerk's Office for five years. Zella was very active in her community and loved to help people in their time of need. She was a member of Edgington Presbyterian Church. Survivors (and spouses) include her daughter, Shirley (Ed) Mroz, Nathrop, Colo.; two sons, Donald (Clarice) Docherty, Reynolds, and Dale (Regina) Docherty, Auburn, N.Y.; nine grandchildren; 18 great-grandchildren; two great-great-grandchildren; three children that she raised; nephew, Donald (Minerva) Guinn, and niece, Patricia (Jim) McManus, both of Taylor Ridge; and Sandy Snyder Crawford, Coal Valley. She was preceded in death by her parents; two brothers, Hale and Fay; and sister, Ruth.