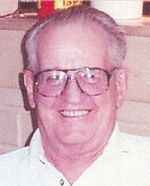 William (Bill) Whitehall, 86 of Keithsburg, Illinois died Tuesday, September 30, 2008 at St. Mary Medical Center, Galesburg. Funeral services are 10:30 a.m. Saturday, October 4, 2008 at Keithsburg First Christian Church. Burial will be in Greenmound Cemetery, Keithsburg. Visitation is at Keithsburg First Christian Church on Friday, October 3, 2008 from 6:00 - 8:00 p.m. with Masonic Services at 8:00 p.m. A memorial fund will be established at a later date. Dennison Funeral Home, Aledo is handling arrangements. William Alva Whitehall was born August 10, 1922 the son of Herbert C. and Rilla Gaylor Whitehall. He married Ella Diehl on June 26, 1943. Bill lived all of his life in the Keithsburg area. He farmed and later worked as a union carpenter. Mr. Whitehall was a lifetime member of the Robert Burns Masonic Lodge and a member of the Keithsburg First Christian Church. From the late 1960's to the early 1990's he was the Mercer County Republican Precinct Committeeperson for the Keithsburg Precincts. He also held many other positions within the Mercer County Republican Party. Bill loved working in his yard with all his beautiful flowers. He also loved the trips to California to watch his grandson's hockey games. His loving smile will be missed. Even as he was dying, all the nurses could not get over his great personality. He was a kind, loving and generous father and friend. He is survived by a daughter and son-in-law, Linda and Rick O'Brien, Keithsburg and a grandson, Jason W. O'Brien, Torrance, CA. He was preceded in death by his parents, wife, Ella, two sons, William Jr. and Sidney Lee and a sister Marion Truman. Online condolences may be left at www.dennisonfuneralhome.com.