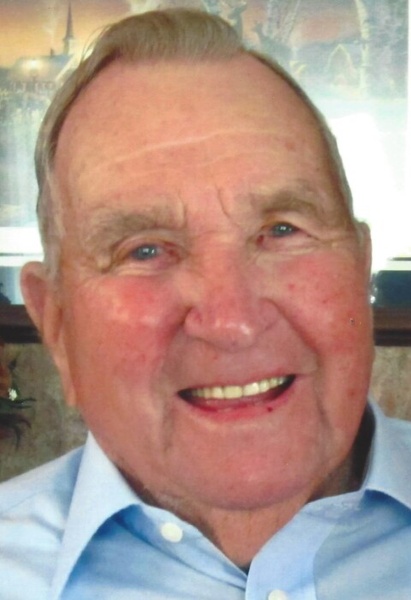 William A. Johnson, 95, formerly of New Windsor, Illinois, passed away on Tuesday, May 11, 2021 at Mercer Manor Rehabilitation in Aledo, Illinois.

A graveside service will be at Hopewell Cemetery, New Windsor at 2:00 p.m. on Wednesday, August 18th with military rites by American Legion Fallerans Post 121.  Following the graveside,  a memorial service will be held at 3:00 p.m. at New Windsor Presbyterian Church.  Memorials may be made to the New Windsor Presbyterian Church, Hopewell Cemetery Maintenance Fund, or the Bryant J. Luxmore Memorial Fund.  Dennison Funeral Home, Viola is assisting the family.

William was born on January 10, 1926, in New Windsor, Illinois. He was the oldest of three sons born to Albert and Elsie Thompson Johnson. Albert Johnson died in a rail yard accident at the Alpha Coal Mine in 1933; Elsie Johnson died five years later in 1938. Their three young sons were cared for by their aunt and uncle Ernest and Lila Johnson. William graduated from New Windsor High School in 1944 and enlisted in the United States Navy that same year.

He served aboard the naval destroyer USS Chevalier in the Pacific campaign. His ship was assigned to provide protection for the aircraft carrier USS Missouri, and accompanied the aircraft carrier into the Tokyo Bay for the signing of the Japanese surrender on September 2, 1945.

After his discharge in 1946, William went to work for Lud Peterson in the fuel oil delivery business in New Windsor. He soon began his own business in conjunction with the Skelly Oil Company and worked for more than fifty years in New Windsor for Skelly and then the Amoco Oil Company for Max and Marty Allen before he retired in 1997.

William married Marcia Ruth Hickok on June 5, 1949. Together they also owned and operated the New Windsor Car Wash for 44 years. They loved to travel together, making regular fishing trips to Canada and Missouri. They supported and followed the athletic careers of their grandsons, traveling across the country to attend many of their games.

They were both active in local organizations throughout their lives, as William at various times served as fire chief and as a fire department trustee, as president of the New Windsor Fair and Rodeo Association, and as a trustee for Tri-County Ambulance and for the Rivoli Township. He was an active member of New Windsor Presbyterian Church and a 74-year member of George Norris Legion Post 484.

The Family would like to extend their gratitude to the Staff of Mercer Manor Rehabilitation and the OSF Hospice team for their great care.