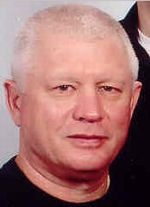 William R. Bonick Jr., 53, of Matherville, died Saturday, Jan. 12, 2008, at his home. Services will be 10 a.m. Thursday, Jan. 17, at Dennison Funeral Home, Viola. Burial is in Sherrard Cemetery. Visitation will be 4-8 p.m. Wednesday, Jan. 16, at the funeral home. A memorial fund has been established for the family and a tree will be planted this spring in his memory. He was born Oct. 17, 1954, in Moline, the son of William R. Sr. and Gloria Dawson Bonick. He married Yvonne Tindall on Sept. 20, 1975, in Milan. He worked at Raymond Corporation, Muscatine. In his early years, he enjoyed playing softball and later coaching baseball and softball. He loved to golf, but his greatest enjoyment was becoming a grandpa. Bill was active in his community. He was a former mayor of Matherville, had served on the village board and was a member of the Matherville Eagles. Survivors include his wife, Yvonne Bonick, Matherville; one daughter and her spouse, Aubree and Josh Norton, Aledo; one son, Aaron Bonick, Matherville; grandson, Drew Norton; mother, Gloria Kruse and friend, Don Staub, Rock Island; one sister and her spouse, Angela and Bob Herberg, Moline; two brothers and their spouses, Doug and Deb Bonick, Joy, and Tony and Angela Bonick, Lafayette, Ore.; many aunts, uncles, cousins, nieces and nephews. He was preceded in death by his father, William Sr.; his in-laws, Warren and Harriet Tindall; and grandparents, Andrew and Ina Bonick and Raymond and Gladys Dawson.

To order memorial trees or send flowers to the family in memory of William Bonick, Jr., please visit our flower store.