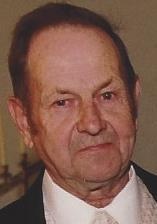 Visitation is Wednesday, March 1st at Dennison Funeral Home, Viola from 11:00 a.m. until 12:00 p.m., at which time family and friends will proceed to Farlow Grove Cemetery, Matherville for graveside services.  Memorials may be left for St. Anthony Catholic Church, Matherville.

Arthur Wayne Meskan was born August 28, 1934 in Savanna, Illinois the son of Charles and Ruth Rogers Meskan.  On May 23, 1964, he married Karen Sue Hollopeter, they later separated.  Wayne worked his whole life as either a union or self-employed electrician; he also worked at Carver Lumber and Anderson Lumber a combined ten years.  He enjoyed coin collecting, mowing and was a WWI and WWII aircraft book collector.  Wayne was a social member of the Moline V.F.W.