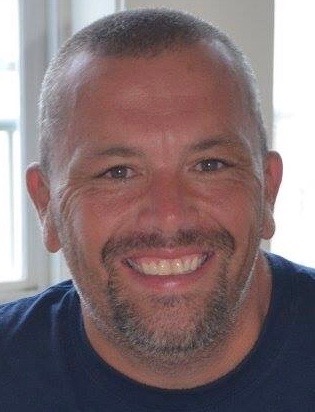 Visitation is Friday, January 24th from 4:00 – 8:00 p.m. at First Christian Church, Keithsburg. Funeral services are 2:00 p.m. on Saturday, January 25th at First Christian Church, Keithsburg. Burial will be in Greenmound Cemetery. In honor of Tony, the family ask those attending the visitation or funeral to wear Chicago Cubs attire. Memorials may be left for Mercer County Jaycees.  Dennison Funeral Home, Aledo is handling arrangements.

Tony Earl Tharp was born on July 24, 1973, in Aledo, Illinois, to Frank and Rebecca Dennison Tharp. Tony attended Seaton School, Westmer, and Aledo High School. After high school, Tony began working for his dad at Northwest Restoration. Tony continued this work until his death. He loved working side-by-side with his parents. His ultimate dream came true when he was able to purchase the business from them in 2018. Tony loved his work and all of the friends he made during his 30-year career. He also was involved in BAC Local 6 JATC.

On June 4, 2005, Tony married Staci Edwards of Aledo, IL. They lived in Aledo until moving to her family’s home in rural Alexis in 2011. During the years of their marriage, Tony and Staci enjoyed going to all of Kaylee and Becca’s sporting events. These were the bonus times they could spend with the girls. Tony would travel any length of time, to anywhere in the United States to see them do what they loved doing.

Tony was also a die-hard Cubs fan. He wanted to see the Cubs play in all the Major League ballparks. Unfortunately, he didn’t get to see every ballpark, but he loved Wrigley Field and Miller Park. Many ball games trips were spent with great family and friends. The two trips he enjoyed the most were going to a spring season game in Arizona with his dad and his nephew, Dayton, and, of course, attending Game 5 of the Chicago Cubs World Series in 2016.

Tony loved going to all of the kids’ activities (even dance and tumbling), hunting, playing golf, and traveling. He was proud of his work with the Aledo Jaycees. Above all, Tony was an amazing father, loving husband, and a great friend to so many.

He is survived by his wife, Staci, three daughters, Kaylee Moseley (Sara Cuzick), The Colony, Texas, Becca Tharp, Galesburg, Illinois, and Addison Tharp, at home, his parents, Frank and Rebecca Tharp, sister, Tina Noe, and nephew Dayton Tharp. He is also survived by his in-laws, Jim and Joan Edwards, 3 sisters and brothers-in-law, and several nieces, nephews, aunts, uncles, and cousins.

Preceding him in death were his maternal and paternal grandparents.