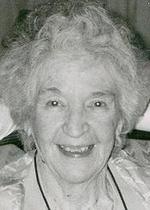 Thelma Bergstrom, 93, of Aledo, Illinois died Saturday, February 19, 2011 at Bettendorf Health Care after a long struggle with Lewy Body Disease. Funeral services are 10:00 a.m. Thursday, February 24, 2011 at Aledo United Methodist Church. Burial will be in Aledo Cemetery with graveside military rites. Visitation is 5:00 - 7:00 p.m. Wednesday, February 23, 2011 at Dennison Funeral Home, Aledo. Memorials may be left for Mercer County Hospital or the Humane Society. Online condolences may be left at www.dennisonfuneralhome.com. Thelma Evelyn Meister Bergstrom was born July 19, 1917 in Tewksbury, Massachusetts, the daughter of Lindsay L. and Mary Sarah McInnis Meister. She married Wendell Bergstrom of Aledo on October 20, 1943. He died April 29, 1993. A Registered Nurse, who graduated from Tewksbury Hospital, she served as the Operating Room Supervisor there from 1938 to 1943. She was an officer in the Army Nurse Corps in World War II. She was a staff nurse at Mercer County Hospital in Aledo for many years, later serving as Director of Nursing Service from 1962 - 1978. She was a member of The American Nurses' Association, National League for Nursing, V.F.W. Auxiliary and American Legion Auxiliary at one time. She was listed in the 1979-1980 edition of "Who's Who in American Women". She was a member of the Aledo United Methodist Church. She is survived by a daughter, Wendy Fifer, Bettendorf, IA and a son, Bruce Bergstrom, Rock Island. Also surviving are 4 grandchildren, Julie Bacorn, East Moline, Chad Fifer, Santa Monica, CA, Brittany Bergstrom, Moline and Jennifer Bergstrom, Champaign, IL. In addition, 4 step grandchildren, Barbara Mack, Moline, Rick Fifer, Bartonville, IL, John Fifer, Bloomington, IL and Susan Bermel, Muscatine, IA. She was preceded in death by, in addition to her husband, a sister, Irene and brothers, Charles, Roy and Roger. Thelma enjoyed animals, crafts, music, watching Fox News on TV and her family, especially her four grandchildren - Julie, Chad, Brittany and Jenny and her 2 great grandsons - Reilly and Ryan Bacorn.

To order memorial trees or send flowers to the family in memory of Thelma Bergstrom, please visit our flower store.