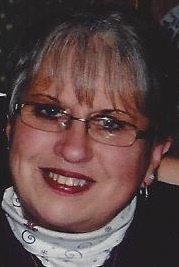 Visitation is Friday, Dec. 22nd from 5:00 – 7:00 p.m. at New Boston United Methodist Church.  Funeral services are 10:30 a.m. on Saturday, Dec. 23rd at the church.  Burial will be in New Boston Cemetery.  Memorials may be left to Alzheimer’s Association.  Dennison Funeral Home, Aledo is handling arrangements.

Terry was born June 15, 1957 in Aledo, Illinois a daughter of Arthur and Bonnie Hake Harter.  The 1975 graduate of Westmer High School went on to graduate from Burlington Beauty Academy in 1977.  On Sept. 23, 1978, she married Gregory Parrish in New Boston.  Terry and her sisters owned/operated the Styling III Salon in New Boston for many years.  She also worked as a Personal Banker for 15 years.  Terry was a member of New Boston United Methodist Church.  In her free-time she enjoyed doing needlepoint and Sunday cards with family, her greatest joy was spending time with family, especially her grandkids.

She was preceded in death by her mother.

To order memorial trees or send flowers to the family in memory of Terry Parrish, please visit our flower store.