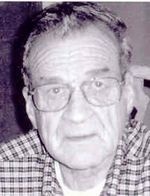 Ted Allison, 72, of Matherville, Illinois died Monday, December 10, 2007 at his home. Funeral services are 1:00 p.m. Saturday, December 15, 2007 at Dennison Funeral Home, Viola. Burial will be in Farlow Grove Cemetery, Matherville. Visitation is Friday, December 14 from 3:00 - 8:00 p.m. at Dennison Funeral Home, Viola. Memorials may be left for the Matherville Eagles Children's Christmas Fund. Ted was born on October 4, 1935 in Matherville to Robert and Clara Cameron Allison. He married Sandra Switzer on July 23, 1960 in Viola. She passed away on April 1, 2006. Mr. Allison worked for International Harvester (Navistar) from 1963-1985. After ninety days of working in the plant he was named Union Steward. He was very active with the Union throughout his time at I.H. He was elected committeeman and later chairman of the bargaining committee. He was also chairman of the Ag. Implement Council, as well as the Harvester Council. He went on to work as a staff representative for the UAW in 1985. He then retired in 1993 from both I.H. (Navistar) and the UAW. After retirement Ted was very active in the Matherville Eagles Club. He enjoyed doing yard work and spending time with his grandchildren. Survivors are sons; Britt of Matherville and Trent and Dee of Milan, grandchildren; Sarah and Shane Hill of Streator, Brady and Jessie Allison of Reynolds, Tara Allison and Bailee Allison of Milan; brother, David and Sheila Allison of Springfield, OH; sisters, Edna and Larry Ripperger of Dahinda and Betty Adams and friend Clarence of Prophetstown and all his brothers and sisters in UAW. He was preceded in death by his parents, 4 sisters, 4 brothers and his wife, Sandra and an infant daughter, Traci.

To order memorial trees or send flowers to the family in memory of Ted Allison, please visit our flower store.