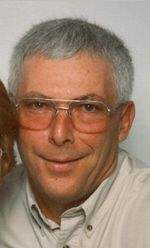 Stephen Dixon, age 57 of Galesburg, formerly of Joy, IL, died Thursday, October 19, 2006 at Genesis Medical Center - East Campus, Davenport, Iowa. Funeral services are 10:00 a.m. Tuesday, October 24 at Dennison Funeral Home, Aledo. Burial will be in Peniel Cemetery, Joy. Visitation is Monday, October 23 from 4:00 - 8:00 p.m. with Masonic services at 8:00 p.m. at the funeral home. Memorials may be left for the family. Stephen was born September 4, 1949 in Aledo, Illinois, the son of Vernon and Betty (McCulley) Dixon. Steve was raised in Joy and graduated from Westmer High School in 1967. He married Linda Melton on March 15, 1969, they divorced in 1988. Steve operated the Texaco Station in Joy in the early 1970's before going to work for Moorman's Manufacturing, Inc. in Alpha for 26 years. He was currently working as a cable tech for Insight of Galesburg. Steve enjoyed cars, his dog and playing and watching sports. He had also played the drums in a local band. He was a member of the Aledo Masonic Lodge #252 A.F. & A.M. and had been a 20 year member of the Joy Volunteer Fire Department. Survivors include his fiance; Vicki Peterson of Davenport, daughters and sons-in-law; Angie and Mike Bennett of Aledo and Abbie and Mike Love of Orleans, IN, son; Andy Dixon of Joy, his grandchildren; Courtney and Taylor Bennett, Brandan and Kevin Dixon and John and Blake Love, his father; Vernon Dixon of Joy, sisters and brothers-in-law; Barb and Allen McNichols of Aledo and Debbie and Leon Stineman of New Boston, a brother; Randy Dixon of Aledo and nieces; Joni Stineman and Jade and Britta Dixon. He was preceded in death by his mother and grandparents.

To order memorial trees or send flowers to the family in memory of Stephen Dixon, please visit our flower store.