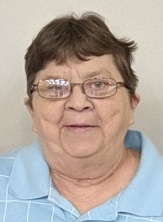 Sherry Barnett, 64, of Aledo, Illinois died Saturday, May 16, 2020 at Genesis Silvis after a brief battle with cancer.

Sheryl “Sherry” was born April 11, 1956 in Ottumwa, Iowa the daughter of Jim and Twila Pettit Rupe.  She was a 1974 graduate of Aledo High School.  On October 24, 1975, she married John P. Barnett in Aledo.  Over the years, Sherry worked several jobs…including a waitress, cashier at Quinn’s, helping at the family body shop and detailing cars at Henderson’s.  What she took most pride in was being a homemaker and raising her sons.

Sherry loved storms and was always keeping an eye on the weather.  She had a love for animals, especially cats.

She was preceded in death by her parents and siblings:  Becky and Steve.

Online condolences may be left at www.dennisonfuneralhome.com