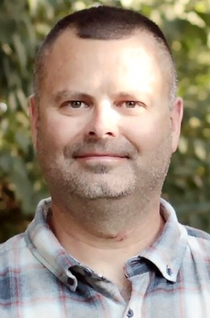 Visitation is 1-5pm Saturday, Sept. 23rd at Dennison Funeral Home in Aledo with a service to follow at 5pm. Memorials may be made to Migraine Research Foundation.

Shawn was born August 12, 1969 in Aledo, IL the son of Lonnie and Patsy Munson Peterson. He married Laura L. Moss Oct. 13, 1991 in Joy, IL.  Shawn served in the Air Force during Desert Storm, as a weather specialist, and was a member of the Aledo American Legion. He was a car and gun enthusiast and enjoyed collecting various sports and beer memorabilia, even though he never drank.  He loved riding his Harley and going on trips with his wife.  Shawn also enjoyed watching movies and quoting them in conversation. He loved his family and was fiercely protective of them. Shawn was a best friend to all and will be greatly missed.

He was preceded in death by his grandparents.

Online condolences may be left at www.dennisonfuneralhome.com.
To order memorial trees or send flowers to the family in memory of Shawn Peterson, please visit our flower store.
Send a Sympathy Card
Send a Sympathy Gift