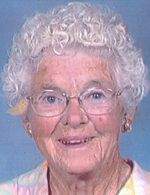 Ruth J. Stephens, 93, a lifetime resident of Gladstone, Ill., died Sunday, Dec. 6, 2009, at Dan-ville Care Center, Danville, Iowa. A graveside service will be held on Ruth's birthday, Dec. 17, at 11:00 a.m. at Olena Cemetery, Olena, Ill. Born Dec. 17, 1915, in Gladstone, she was the daughter of George and Maggie Sage Galbraith. On Aug. 26, 1967, she married Guy Stephens in Aurora, Ill. He preceded her in death on Aug. 14, 1982. Ruth had worked for 16 years at the Burlington Basket Factory before becoming a homemaker. She enjoyed crocheting and going on walks. She was a member of the Gladstone Methodist Church. Survivors include one sister, Herma Sheppard of Burlington; and several nieces and nephews. Besides her husband she was preceded in death by her parents, 3 sisters, 4 brothers and special friend, Harold Jacobs. Memorials have been established for Henderson County Health Center or Danville Care Center Activity Fund. Dennison Funeral Home in Aledo, Ill., is handling arrangements.

To order memorial trees or send flowers to the family in memory of Ruth Stephens, please visit our flower store.