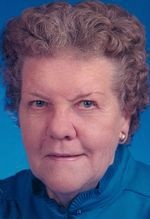 Ruth A. Goben, 86, formerly of Rock Island, Alexis and Viola died Thursday, June 25, 2009 at Mercer County Hospital, Aledo. Graveside services are 11:00 a.m. Monday, June 29, 2009 at Viola Cemetery, Viola. Dennison Funeral Home, Viola is assisting the family. Online condolences may be left at www.dennisonfuneralhome.com. The former Ruth Swanson was born May 21, 1923 on the Swanson Family Farm near Alexis, Illinois, the daughter of Clarence and Esther Chezem Swanson. She married Frank J. Goben at the Methodist Parsonage in Viola on February 20, 1943. He died April 6, 1998. She had been employed at the Rock Island Arsenal during the war years then worked at the Eagle Warehouse for 8 years. Ruth retired from U.S. Army Information Systems Command, Rock Island Arsenal, in 1985 with 20 years. Survivors include her son, Gary Goben, Milan, IL; granddaughter, Kim Brito and great granddaughters, Lianne and Kristin Falenski and Marci Brito. She was preceded in death by her parents, husband and granddaughter, Lori Falenski.