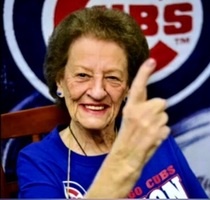 Ruth Elaine Brown was born July 23, 1927 in Keithsburg, Illinois a daughter of True Clinton and Pearl Mabel Harris Brown.  On March 3, 1947, she married Wayne L. Dennison in Rock Island.  They were married until his death on March 8, 1995.  In her early years, she worked at Keithsburg Button Factory and as a nanny; most of her life was spent as a homemaker.  Ruth enjoyed time spent with family, shopping, going out to eat, playing cards, canning and sewing.  She and Wayne enjoyed country music and trips to Branson.  After moving to Brookstone in Aledo, she enjoyed the Hanson Brothers music.  Ruth was an avid Cubs fan and was ecstatic she got to witness them win the World Series.

To order memorial trees or send flowers to the family in memory of Ruth Dennison, please visit our flower store.