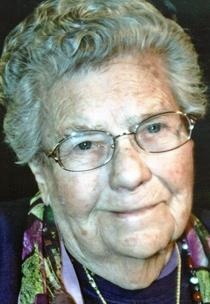 Ruth Christina was born July 11, 1914 in Sheffield, Illinois a daughter of George and Mable Norton.  Around 1930, she married Ralph Bates.  She later married Glenn Beard, they were married for over 40 years until his death in 1995.  In her early years, Ruth worked as a waitress; she later worked several years for the Viola Telephone Company then as a dietitian at Moline Public Hospital.  She was a member of Viola United Methodist Church.  Ruth enjoyed traveling as well as playing cards and attending card club.  Her greatest joy was spending time with her family, especially her grandchildren.

Those left to cherish her memory are her daughters:  Joyce (Larry) Graves, Mt. Sterling, IL and Jean Agan, Three Lakes, WI and many grandchildren and great grandchildren.

She was preceded in death by her parents, husband, son – George Bates, 2 sisters and 3 brothers.