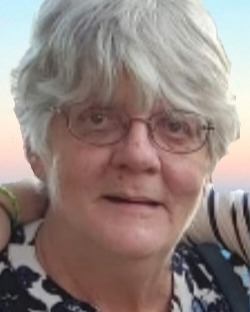 Roxie was born October 5, 1950 to Marjorie MacDonald (Sipes). Roxie and Bill were married November 28, 1970. She was a stay-at-home mom that proudly raised their children Tonya Ogden of Edgington, David Portugue, deceased, Kathy (Steve) Hyde of Milan, and William D. (Angela) Portugue of Seaton.

Roxie grew up in Andalusia where she and her brother Merle Sipes were raised by their grandmother Lulu West. Roxie was very close to her Aunt Doris Quick “not the momma” and enjoyed yard sales, crossword puzzles, watching soap operas, and night time series.

Roxie loved all of her grandkids Amber, Lindsey, Dalton, Kylie, Taygen, Gracie, and Izibella and her great grandchildren Gabe and Shire and bragged about them frequently.  Bill’s family became her own, including his parents Helen and Quinten Portugue.  Roxie has several nieces and nephews that she loved dearly, as well as her very special cousin Dorothy Carney.

Roxie is survived by her children Tonya, Kathy, and Bill; her grandchildren and great grandchildren; her brother Merle Sipes, cousin Dorothy Carney,

As per Roxanna’s wishes she will be cremated through Dennison Funeral Home, Viola. The family will privately hold services.  A Celebration of Life, with family and friends that wish to attend, will be held Sunday, December 18th at 11:00 a.m. at Luli’s in Milan.

Memorials will benefit her grandchildren and may be directed to Roxanna Portugue Account at RIA Credit Union, 110 10th Avenue East, Milan, IL 61264.

To order memorial trees or send flowers to the family in memory of Roxanna "Roxie" Portugue, please visit our flower store.