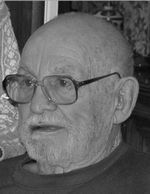 Robert R. "Bob" Burger Jr., 88, of Eliza Township, died at home Tuesday, June 9, 2009. There are no funeral services at this time; a memorial service will be held at a later date. Military rites will be accorded by Eliza American Legion Post 1971. Memorials may be made to the Eliza Community Center, 555 155th Ave., New Boston, IL 61272. Dennison Funeral Home, Aledo, is assisting the family. Bob was born Nov. 3, 1920, in Spokane, Wash., the son of Robert Sr. and Agnes Nichols Burger. He spent his youth in the Pacific Northwest before entering military service in 1942. Bob served five years in the Army Air Corps during World War II, attaining the rank of major. He flew in Africa and Europe as a B-25 pilot and was also a certified navigator. While stationed in Corsica, he flew 70 bombing missions to Italy, Germany and France. His military awards include the Purple Heart, seven Air Medals, two Distinguished Flying Crosses, one Silver Star and the Legion of Merit. After military service, he attended Oregon State University and married Rose-Marie Essley on June 19, 1948. Bob and Rose-Marie moved to Illinois to farm with her parents, E.C. and Elfa Essley, in 1949. He was active in farming until age 83. Bob was influential in combining eight existing one-room country schools into the Eliza School District and spearheaded building the Eliza School, (now the Eliza Community Center.) He was instrumental in forming the original Westmer School District and served on the school board for 20 years. He and his family built a sailing yacht named Windsong in Port Townsend, Wash., and sailed it through the Panama Canal to the Virgin Islands in 1980. They enjoyed the boat in the Caribbean and Northeast waters for many years. A member of the Eliza American Legion, he is survived by his wife, Rose-Marie; daughter, Lark; son, Jeff; two granddaughters; and two sisters. He was preceded in death by his parents; his twin brother; and son, Timothy. Online condolences may be left at www.dennisonfunerlhome.com.