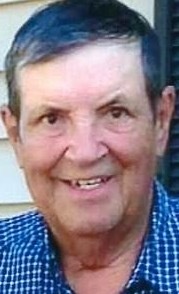 Ray was born December 4, 1947 in Moline, Illinois a son of Leslie and Doris Peterson Docherty.  After graduating from Sherrard High School, he attended Blackhawk College and Platteville University in Wisconsin.  Ray married Glenda Daggett on July 5, 1969 in the Boden Community Church.  Ray was proud to be a veteran, serving in the U.S. Navy from 1970 to 1976, then working at the Rock Island Arsenal, retiring in 2007.  He was a member of the V.F.W.  Ray's greatest joy was his children and grandchildren.  He especially loved watching any of their sports and accomplishments; and would talk softball for hours to anyone that would listen.  He loved to cook, loved spending time with his large family at backyard cook-outs or camping together, and traveling...always wanting to take a trip somewhere.

He was preceded in death by his parents and brother:  Leslie Docherty.

To order memorial trees or send flowers to the family in memory of Ray Docherty, please visit our flower store.