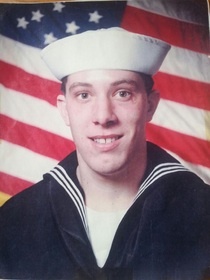 A memorial service will be held at 4:00 p.m. on Thursday, Sept. 24th at the United Methodist Church in Preemption, Illinois.  Following the service will be a time of food and fellowship, until 7:00 p.m. when Masonic services will be conducted.  Graveside military rites will be held at 12:00 (Noon) on Friday, Sept. 25th at Vermont Cemetery, Vermont, Illinois followed by a gathering at the Vermont American Legion.  In lieu of flowers, memorials may be left for Preemption United Methodist Church or to the family.

Randy was born November 26, 1962 in Rock Island, Illinois a son of Richard and Marjorie Parsano Rutledge.  After graduating from Sherrard High School, he entered the United States Navy in 1984.  Randy was career Navy, but a significant head injury forced his retirement and discharge from the Navy in 1992.  Upon leaving the Navy, he became an auto mechanic, retiring in 2002.  In his spare time, he enjoyed working on his 1953 Chevy truck.  Randy was a member of Preemption Masonic Lodge.

Survivors include his daughter- Melanie Johnson and her children, Printis, Norma and Perseus Johnson all of Puyallup, WA; son- Rodney Rutledge and his son Rodney, Jr. and adopted son Christopher Washington, all of Federal Way, WA and his father- Richard Rutledge, Preemption, IL.

Online condolences may be left at www.dennisonfuneralhome.com.
To order memorial trees or send flowers to the family in memory of Randy Rutledge, please visit our flower store.