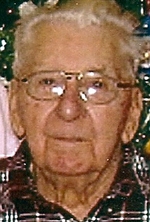 Funeral Mass is 12:00 p.m. (Noon), with visitation from 10:00 a.m. until the time of service, on Monday, May 28, 2012 at St. Anthony’s Catholic Church, Matherville.  Memorials may be left for the Antique Engine and Tractor Association of Geneseo.  Burial will be in St. John Catholic Cemetery, Viola.  Dennison Funeral Home, Viola is handling arrangements.

Peter spent his early years working for a farmer for his board and room.  In 1936, he went to work at John Deere Plow & Planter, Moline where he worked until retirement in 1970.  He was always very proud to work for John Deere.

Peter learned to drive a 1919 Model T at the age of 10.  He continued to drive proudly into his late 90’s.  Peter loved riding his bicycle daily and was still riding in the annual “Ride The River” bicycle ride in the Quad Cities in his late 80’s early 90’s.

Peter was a gifted individual.  He could fix and make just about anything.  The community always knew where to go when something needed fixing.

Peter was a member of St. Anthony’s Catholic Church, Matherville and one of the original members of the Antique Engine and Tractor Association of Geneseo, Illinois.

He was preceded in death by his wife, daughter Diane Lake in 2010, his parents, 3 sisters and a brother.  May they rest in peace.

To order memorial trees or send flowers to the family in memory of Peter Claeys, please visit our flower store.