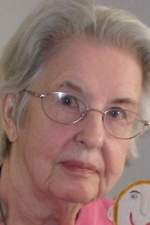 Pauline was born September 30, 1921 in Tipton, Iowa a daughter of Gilbert and Dorothy Crewes Johnston.  She graduated from Moline High School.  Pauline married Ralph Brubaker on February 5, 1940 in Davenport.  He preceded her in death in May of 1996.  Mrs. Brubaker was a homemaker.  She also was a prep cook for various restaurants.  As the family matriarch, she was the “go to” person for all things cooking.  She enjoyed cooking, reading and most of all, spending time with her children, grandchildren and great grandchildren.  Pauline was a member of St. John’s Anglican Church, Preemption and Trinity Anglican Church, Rock Island where she participated in St. Anne’s and St. Elizabeth’s Altar Guilds.

Those left to cherish her memory are her daughters, Kris (Greg) Leatherman, Moline, IL and Susan Crawford, Eden Prairie, MN; 7 grandchildren and 8 great grandchildren.  She was preceded in death by her parents, husband, son Dan Sprague, daughter Rhonda Miller and brothers Eddie and Robert.