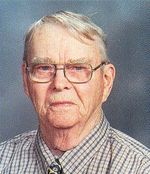 Paul W. Heiple, 89 of Illinois City, Illinois died Thursday, May 3, 2007 at his home. Services will be 7 p.m. Sunday, May 6, at Zion Lutheran Church, Taylor Ridge, with visitation one hour prior. Dennison Funeral Home, Aledo, is handling local arrangements. A funeral service also will be 1 p.m. Monday, May 7, at St. John Lutheran Church, Bennington, Iowa, with visitation/luncheon from 11 a.m. until the time of service. Burial will be in Waterloo, Iowa, Memorial Park Cemetery. Parrott & Wood Funeral Home, Waterloo, is handling arrangements. Memorials may be made to the Paul Heiple Memorial Fund. Paul was born July 10, 1917 in Dewar, Iowa the son of David and Caroline (Emert) Heiple. He married Zelma Freed on September 15, 1937 in Jesup, Iowa. She passed away on May 6, 1991. Mr. Heiple farmed most of his life in the Blackhawk County Iowa area. He then went to work as a machinist at CMC, Waterloo for 12 years, retiring in 1982. Paul enjoyed reading and traveling. Mr. and Mrs. Heiple traveled the United States extensively, traveling to all 50 states. Upon his wife's passing, Paul began his international travel, going on African safaris and visiting New Zealand. Paul was very active in the community. He was a member of Blackhawk County Extension and the Dunkerton School PTA, having served both organizations as president. He had been a member of the Bennington St. John Lutheran Church where he served on the church council for several years, he currently was a member of Zion Lutheran Church, Taylor Ridge, Illinois. He was a founding member of the Dewar Community Hall and had been a 4-H Leader of Poyner Township. Mr. Heiple is survived by daughters - Marilyn (Bill) Parchert, Lynda Anania and Jessa Gabriel; a son - Wayne Heiple; 7 grandchildren; 9 great grandchildren; 1 great great granddaughter and sister-in-law - Bonnie Heiple. Paul was preceded in death by his parents, wife, a grandson, 2 sisters and 3 brothers.