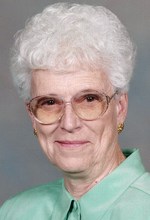 Norma was born January 25, 1933 in Pottersburg, Missouri, a daughter of Leslie C. and Oma Lee Searcy Clevenger.  On April 8, 1950, she married Ronald Neal Morrison in Muscatine, Iowa.  He preceded her in death on July 4, 1994.  They started farming with his parents, Richard Dale “Dick” and Nona “Irene” Carey Morrison in the Oakville bottom in Iowa.  In 1957, they moved to Illinois and continued farming there and in Iowa.

Norma led by example.  She gave of herself to her family, church and community.  She was a 50 year member of the United Methodist Church of Joy, in the United Methodist Women and the Golden Links.  She campaigned for the American Cancer Society, a 50 year member of the O.E.S. and was awarded the Ageless Achievers Award for her church and community involvement.  She sewed clothing for her children when young and made quilts for her twelve grandchildren.  She loved her Iowa Hawkeyes and was a big fan of any sport her family was in.  Norma was an Avon Lady for 30 years.  A lovely lady who opened her home for luncheons and family and friends.  She belonged to two card clubs.

She was preceded in death by her parents, husband, daughter Robin Dale Laughlin in 2005, great grandson Cole Dieckman in 2012 and brother Glen Clevenger in 2012.