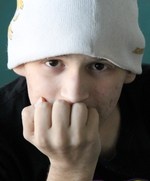 Nathan Andrew Robertson, 15, of New Boston, IL passed away from cancer on Saturday Oct. 6th, 2012, at home with his loved ones.

Services will be held at 1:00 p.m. on Thursday, October 11, 2012 at New Boston United Methodist Church.  Following the services, cremation rites will be accorded.  Visitation is Wednesday, October 10, 2012 from 5:30 – 8:30 p.m. at Mercer County Junior High School Gymnasium, Joy, Illinois.  In lieu of flowers, memorial contributions in Nathan’s honor may be directed to the family.  Dennison Funeral Home, Aledo is handling arrangements.

Nathan was a highly loved young man. His family and friends were always his first priority, he was more than a big brother to his younger siblings he was more like a father figure to them.  His little brother and sisters would always go to him for any help they needed. He loved listening to music, playing on his phone, going to the movies, or just hanging/talking with his friends.  He always had a smile on his face whether he had a bad day or not. He was one to worry about how everyone else was doing/ feeling before himself. Nathan was the strongest bravest young man anyone could meet. He was the greatest son a mother/father could ask for!

He was preceded in death by his great grandparents Ruby, Richard Bunn, Wayne Garrett and Lottie Fuller and great great grandma Lou Brown.