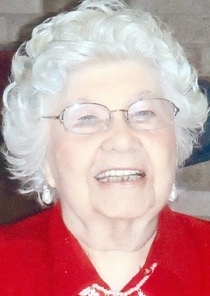 Funeral services will be held on Tuesday, June 16, 2015 at 11:00 A.M. at the New Life Assembly of God Church in Aledo, Illinois, with visitation beginning at 10:00 A.M.  A fellowship will be held at the church after the funeral service before proceeding to Indian Creek Cemetery in rural Columbus Junction, Iowa for interment. In-lieu of flowers, memorials may be made to the family or Activity Room at Genesis Senior Living- Aledo.  Dennison Funeral Home in Aledo in charge of arrangements.

She helped her husband farm in rural Mercer County area until 1953. She was an LPN for the former Fortner, York, and DeSmith Nursing Homes. She received her GED in 1994. She also was a rural newspaper carrier for the Argus Newspaper. She was a member of the New Life Assembly of God Church in Aledo, Illinois since 1950, President of the Women’s Missionary Council of Assembly of God Church for several years; Mercer County Auxiliary, and the Sunshine Circle Club.

To order memorial trees or send flowers to the family in memory of Muriel Carey, please visit our flower store.