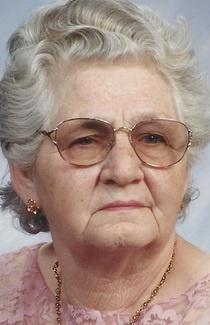 Funeral services are 4:00 p.m., with visitation 1 hour prior, on Wednesday, December 14th at the First Christian Church, Keithsburg, Illinois.  Following the service, cremation will be accorded with a private family burial to be held at a later date in Greenmound Cemetery, Keithsburg.  Memorials may be left for the church.  Dennison Funeral Home, Aledo is handling arrangements.

Mildred LaVonne was born January 11, 1931 in Marble, Minnesota to Richard and Adaline Bischoff Johnson.  At an early age, she was adopted by John and Clara Anderson Klongerboe.  In 1950, she married Elmer B. Reckers in Kahoka, Missouri.  Later, in 1972, she married John Shoemaker in New Boston.

Mildred worked at Heinz in Muscatine for 20 years and was a lifetime homemaker, wife, mother and grandmother.  She loved sewing, embroidery, canning and took great joy in taking care of others.

She was preceded in death by her parents, adoptive parents, both husbands, daughters:  Lori and Tina, 3 grandchildren, brother:  Orin “Bud” Klongerboe and sister:  Darlene Kjosta.

To order memorial trees or send flowers to the family in memory of Mildred Shoemaker, please visit our flower store.