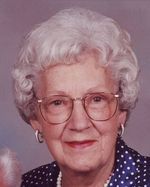 Maxine Hutchins of San Manuel, Arizona, died Saturday, April 14, 2007 in Tucson, AZ. Services will be 1:00 p.m. Saturday, April 21, 2007 at Dennison Funeral Home, Viola, IL. Burial will be in Viola Cemetery. Visitation will be at the funeral home on Friday, April 20 from 6:00 - 8:00 p.m. Online condolences may be left at www.dennisonfuneralhome.com. Maxine Thompson was born in Viola, IL on January 13, 1925, a daughter of Charles (Guy) and Nora Yerkey Thompson. She lived in Viola and Aledo until moving to Arizona. She married Donovan Hutchins in 1942 in Kahoka, Missouri, and recently celebrated their 65th wedding anniversary. Mrs. Hutchins graduated from Viola High School where she was Chairman of the Pep Committee. She worked for John Deere Company during the war. Along with being a farm wife, her many other jobs included; Office Manager for Hutchins TV and Appliances, selling Tupperware and Vivian Woodard Cosmetics. She also was office manager for Viola Sales and Engineering and later the Viola office of Kewanee Union Federal Savings and Loan. Maxine is a past member of Beta Sigma Phi Sorority, American Legion Auxiliary Post 229 and VFW Auxiliary Post 1571. Her hobbies included working with and teaching ceramics, for which she received several awards. She also enjoyed oil painting, gardening, cooking and going dancing with her husband. Survivors include her husband, Donovan; daughter Janice (Mrs. Terry Nelson) of Rio Rico; son, Raymond, of Green Valley; and son Rodney and wife Debbie of Tucson; all of Arizona; six grandchildren, four step-grandchildren and two great-grandchildren. Donations may be made to San Manuel Presbyterian Church 801 McNab, Pkwy. PO Box 679 San Manuel, Arizona 85631 or Odyssey Health Care Hospice, 1730 E. River Road, Ste. 107, Tucson, Arizona 85718.