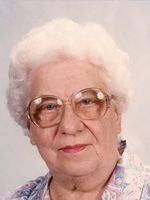 Mary J. Sanquist, 92, of Matherville, died Friday, July 20, 2007, at Mercer County Nursing Home, Aledo. Funeral Mass will be 10 a.m. Tuesday, July 24, at St. Anthony's Catholic Church, Matherville. Burial is in St. John's Cemetery, Viola. Visitation will be 5 to 7 p.m. Monday, July 23, at Dennison Funeral Home, Viola, with a rosary to be recited at 7 p.m. A memorial fund will be established. She was born April 14, 1915, in Matherville, the daughter of John and Pauline Snyder Slavish. She married Freeman Sanquist Sept. 28, 1937, in Aledo. He was killed in action while serving with the Army in France on Aug. 28, 1944. Mary tended bar at Miller's Tap in Matherville for many years. She was an avid Cubs fan and loved spending time with her grandchildren and great-grandchildren. Mary was a member of St. Anthony's Catholic Church in Matherville. She also belonged to Matherville Eagles Auxiliary. Survivors (and spouses) include two daughters, Janice Fenner, Matherville, Jeanne (Dallas) Davenport, East Moline; four grandchildren, Troy (Beth) Fenner, Tracy (Barry) Hoff, Denise (Greg) Hiner and Danielle Davenport; three great-granddaughters, Nicole Fenner and Olivia and Alexis Hoff. She was preceded in death by her parents, husband, one sister and four brothers.

To order memorial trees or send flowers to the family in memory of Mary Sanquist, please visit our flower store.