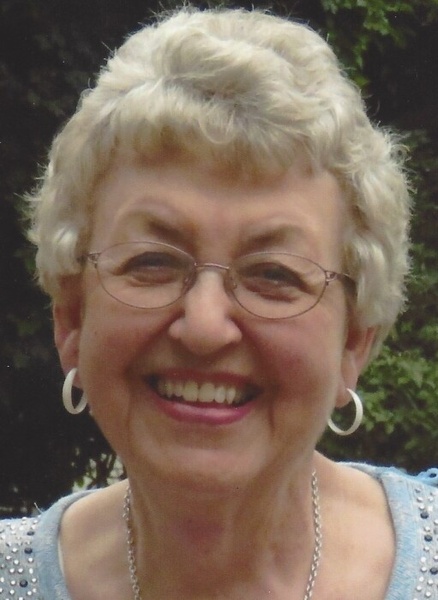 Mary Bjorling, 85, of Altona, Illinois  stepped into heaven on January 13, 2021 at her daughter's home in Viola surrounded by her five children.

A “walk through” visitation will be held from 1 – 4 p.m. Sunday, January 17th at Dennison Funeral Home, Viola.  Due to Covid-19 restrictions, social distancing guidelines will be followed and masks will be required within the funeral home.  Private funeral services will be held Monday followed by burial in Glenwood Cemetery, Coal Valley.  Family and friends may view the service on the Dennison Funeral Home Facebook Page with the livestream beginning at 9:55 a.m. Monday, January 18th.

She was born in Moline, daughter of John "Ed "and Isabelle (Williams) Wright.  Mary valued connections and relationships, keeping every friend she ever made, starting with grade school. She was part of what she claimed was the original “Valley Girls” a card club of Coal Valley chums that started after school graduation, not so much to play cards but to keep in regular contact through the years. Her circle of friends expanded throughout her life.

She grew up on an old style family farm in Coal Valley Illinois and always remembered the joys as well as the hardships that are part of farm life. This foundation laid in her youth coupled with genuine interest and respect of others and a strong mind led to a successful career in journalism. She joined the Moline Dispatch in 1966 as a correspondent and became a full time staffer in the Cambridge, IL Dispatch office in 1971. She was named farm editor in 1973. She graduated from Moline High School in 1953 and acquired a few college courses along the way but it was the mentorship of coworker and friend Barbara Reed she credits for her start in a field for which she was academically unprepared.

She has accomplished what few realize, winning every local, state and national award possible for farm editors at that time. She was named Outstanding National Communicator by the U.S. Association of Soil and Water Conservation Districts. The Illinois Pork Producers Association named her top state communicator, as did the Illinois Livestock Feeders Association and the Illinois Association of Soil and Water Conservation Districts.  Her local awards included one from the Henry County Farm Bureau, and both the Rock Island County and Henry County Soil and Water Conservation Districts.  She served as president of the Newspaper Farm Editors of America, elected in 1981. She headed and compiled the first national survey of the group on working conditions and salaries for farm editors.  The late Judge Clarence Darrow, a former state senator, said of her, "She was one of the few farm editors who knew and understood both farming and farm legislation." After retiring from full time newspaper journalism, she became a freelance writer for the Swiss Valley Company's, "The Dairyman", a monthly publication sent to Swiss Valley Coop farm members. This endeavor provided wonderful adventures with her husband, Lowell, as they traveled, met and interviewed dairy families throughout the upper midwest, garnering additional awards.

Mary was a dedicated member of Immanuel Lutheran Church in Altona, serving in many capacities. She was very supportive of community activities with her husband Lowell, volunteering for many organizations and events. They both found great satisfaction seeing the success of the young men from Estonia and Denmark who lived with them while they learned American agricultural practices.  Of note was her unchallenged role in providing Lutefisk for the VASA Lodge at Christmas for many years. Whenever able, she attended the events and activities of her multiple grandchildren and great grandchildren.

It is her desire to have a Celebration of Life picnic in September of 2021 when we can all be together.

Donations in Mary's memory can be made to The Galesburg Rescue Mission, The Oneida Emergency Food Pantry or the Bishop Hill Heritage Association.