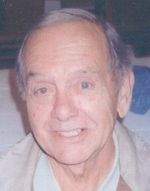 Marvin "Porky" Matkovic, 82, of Matherville, died Monday, Sept. 17, 2007, at Aledo Health and Rehab. Graveside services will be 11 a.m. Wednesday, Sept. 19, at Farlow Grove Cemetery, Matherville, with military rites conducted by Mercer County VFW Post 1571. There is no visitation. Dennison Funeral Home, Viola, is handling arrangements. In lieu of flowers, memorials may be left for the Farlow Grove Cemetery Association. He was born Dec. 5, 1924, in Matherville, son of John and Anna Adams Matkovic. He graduated from Sherrard High School and attended Augustana College. Mr. Matkovic was in partnership with his father and brother in their grocery store and meat market, John's Market in Matherville, retiring in 1976. Marvin served in the Army during World War II in the European Theater. He enjoyed yard sales and playing bingo or cards. In his younger years, he had a love of watersports and was a pilot. For many years he was on the Farlow Grove Cemetery Board, was a member of the Matherville Eagles and the Viola American Legion. He attended the Matherville Community Church. One thing Mr. Matkovic was very proud of was being a 100-pint blood donor. Survivors include his sister, Ganna McWhorter, Aledo; seven nieces and nephews, Ann Pastucha, Peoria, Ill., Mort McWhorter, Aledo, Nancy Coulter, Joy, Marla Miller, Dan Matkovic and John Matkovic III, all of Matherville, and Jeff McWhorter, Aledo. He was preceded in death by his parents and a brother, John Matkovic Jr.

To order memorial trees or send flowers to the family in memory of Marvin "Porky" Matkovic, please visit our flower store.