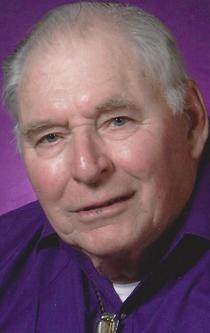 Mass of Christian Burial will be Tuesday, December 27th, with visitation 1 hour prior, at St. John’s Catholic Church, Viola.  Burial will be in St. John’s Cemetery, Viola.  Memorials may be left for the church.  Dennison Funeral Home, Viola is handling arrangements.

Marvin was born December 24, 1931 in Clinton, Iowa a son of Hubert William and Hazel Bast Hoffman.  He served in the United States Navy from 1951-1954.  On June 2, 1979, he married Dorothy Denman in Viola.  Marvin worked 32 years for Case/International Harvester at the Harvester Plant in East Moline.  He was a member of St. John’s Catholic Church, Viola.  In his spare time, he enjoyed woodworking and gardening.  Marvin loved helping others; especially his farmer friends, as he wasn’t a farmer himself, but was a farmer at heart.