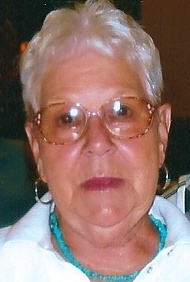 Graveside services are 11:00 a.m. Monday, July 15, 2013 at Vermont Cemetery, Vermont, Illinois.  Visitation is Sunday, July 14, 2013 from 3:00 – 5:00 p.m. at Dennison Funeral Home, Viola, Illinois.  Following the visitation, please join the family for a time of food and fellowship at Preemption United Methodist Church.  In lieu of flowers, memorials may be left for Preemption Methodist Church, Sherrard Fire Dept. or Shriner’s Hospital for Crippled Children.

Marge absolutely loved her yard and flowers.  Her greatest love though was her family, especially her grandchildren.  Along with her grandson, she was a big time Bulls fan.  She was a member of the Preemption United Methodist Church, Sherrard Fire Auxiliary, Gold Wing Road Riders Association and former member of Eastern Star.  She and her husband enjoyed wintering in Arizona.  While in Arizona, she helped at the school of San Lucas.

She was preceded in death by her parents, daughter Melanie Rutledge in 1968 and sister Mary Lou Belville.