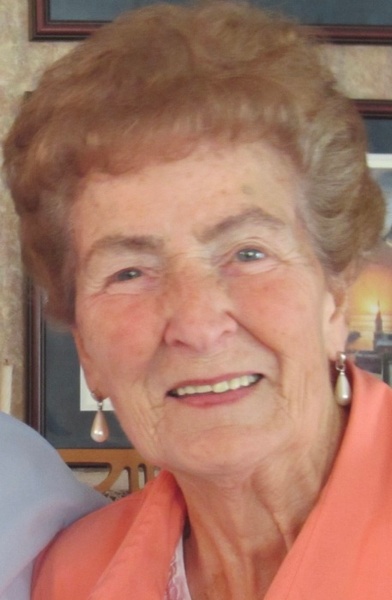 A family graveside service will be at Hopewell Cemetery, New Windsor at 1:00 p.m. on Sunday, August 19th.   Following the family graveside, friends and family are welcome to attend a memorial service to be held at 2:00 p.m. on Sunday at New Windsor Presbyterian Church.   Memorials can be made to the New Windsor Presbyterian Church, Hopewell Cemetery Maintenance Fund or the Bryant J. Luxmore Memorial Fund.  Dennison Funeral Home, Viola is assisting the family.

Marcia was born April 2, 1930 in New Windsor, Illinois, daughter of Myron and Violet Gebhart Hickok.  She married William A. “Bill” Johnson on June 5, 1949.

She attended Monmouth College, employed by Hazel Dell, Winola and Sherrard Schools where she continued to be involved with the ROAR program.  William and Marcia owned and operated the New Windsor Car Wash for 44 years.

Marcia was very active in the New Windsor Presbyterian Church by serving on many committees including Craft Guild, UPW,  Dorcas, Sunday School Teacher, Choir Member and wherever else she could serve.  She was a Charter Member of the George Norris Auxiliary 484, Red Hat Society, Clara Lodge, women’s golf league and many card clubs.

Marcia was a well-known seamstress spending many hours at her sewing machine.

She was preceded in death by her parents, brother, Wayne Hickok, and grandson, CPL Bryant (B.J.) Luxmore.

To order memorial trees or send flowers to the family in memory of Marcia Johnson, please visit our flower store.