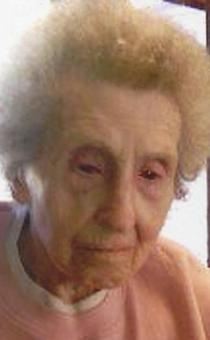 Mass of Christian Burial will be 10:00 a.m. Wednesday, October 29, 2014 at St. Anthony Catholic Church, Matherville.  Burial will be in St. John’s Cemetery, Viola.  Visitation is Tuesday, October 28 th from 5:00 – 7:00 p.m., with rosary recited at 7 p.m., at Dennison Funeral Home, Viola.  Memorials may be left for St. Anthony Catholic Church or St. John’s Cemetery.

Luella was born August 3, 1907 in Cable, Illinois, the daughter of Joseph and Ida Ellis Raisbeck.Her family moved to Matherville, Illinois when she was about two years old. Luella married George Basala, Jr. on December 16, 1922 at St. Catherine’s Catholic Church in Aledo, Illinois.He preceded her in death on January 15, 1990.Luella was a homemaker all of her married life.She was a loving and devoted wife, mother, grandmother and great grandmother.In earlier years, she enjoyed church, traveling vacations, crocheting, playing cards, her flower gardens and cooking holiday meals.Luella resided in Matherville until July 2002.Since then, she resided at Genesis Senior Living (formerly Mercer County Nursing Home) in Aledo.She was a member of St. Anthony Catholic Church in Matherville since 1923.

To order memorial trees or send flowers to the family in memory of Luella Basala, please visit our flower store.