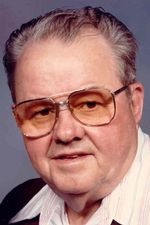 Loren "Mac" Yerkey, 85, of Viola, died Monday, Oct. 22, 2007, at his home. Services are 10 a.m. Friday, Oct. 26, 2007 at Dennison Funeral Home, Viola. Burial is in Viola Cemetery. Military rites will be conducted by Viola American Legion. Visitation will be 5-7 p.m. Thursday, Oct. 25, at Dennison Funeral Home, Viola. Memorials may be made to the Viola American Legion or Viola Fire Department. He was born Feb. 17, 1922, in Viola, the son of Fred and Grace McLaughlin Yerkey. He married Dorothy Swanson on March 14, 1942, in Kahoka, Mo. Mac worked at the JI Case Rock Island Plant for 17 years. He then went to work at the John Deere Industrial Works in Moline for 23 years, retiring in 1984. Mr. Yerkey also owned and operated Yerk's Excavating. He served with the Navy Seabees in the Pacific Theater during World War II. His enjoyments were fishing, golfing, dancing and visiting with friends at local restaurants. He also loved being around his grandchildren and great-grandchildren. Mac was past commander of the Viola American Legion Post 229 and was a member of the Viola VFW Post 2623 and the Viola United Presbyterian Church. Survivors (and their spouses) include wife, Dorothy Yerkey, Viola; one daughter, Connie (Bob) Slater, Milan; two sons, Roger (Linda) Yerkey, Milan, and Fred (Debbie) Yerkey, Viola; 10 grandchildren; 15 great-grandchildren; two sisters, Gloria Meeker, North Henderson, and Patricia Ward, Milan. He was preceded in death by his parents and a sister, Betty Peterson.

To order memorial trees or send flowers to the family in memory of Loren Mac Yerkey, please visit our flower store.