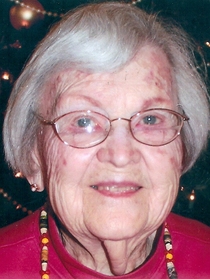 Visitation is Thursday, November 10, 2016 from 4:00 – 7:00 p.m. at Dennison Funeral Home, Viola.  Private graveside services will be held in Viola Cemetery.  Memorials may be left for either the Preemption or Viola United Methodist Church or Mercer County Senior Citizens Center.

Lorene was born March 4, 1917 in Viola, Illinois a daughter of John and Nell Brown Fisher.  She was educated in the Viola Schools.  On October 24, 1935 in Oregon, Illinois, she married Earnest T. Anderson of Joy, Illinois.  They were married until his death on January 28, 1976.  She and her husband devoted their lives to farming in Mercer County.  Lorene enjoyed going to the senior citizens center, and also liked to play a game of cards.  She was always a person that could do anything and helped many.

She was preceded in death by her husband, sons:  Larry, Carl and Don, granddaughter:  Shan Peterson, daughter-in-law:  Judy Anderson; 3 sisters and 5 brothers.