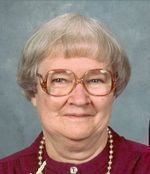 Leanore G. Hutchins, 85, of Viola, died Monday, Aug. 18, 2008, at Mercer County Hospital, Aledo. Services are 11 a.m. Thursday, Aug. 21, 2008 at Dennison Funeral Home, Viola, with visitation one hour prior. Burial is at Viola Cemetery. Memorials may be left for the family. She was born May 25, 1923, daughter of John and Mayme Yerkey Scott. She married Chester Hutchins in 1941, in Kahoka, Mo. He died in February 1994. She was a homemaker. Mrs. Hutchins enjoyed sewing, reading, word puzzles and spending time with her family. Leanore was a member of the Viola United Methodist Church and was very involved in church activities. For many years she conducted Bible study out of her home. Survivors (and spouses) are daughter, Ruth Ann (Rich) Ripka, Galesburg; sons, Gary (Janet) Hutchins, Rock Island, Roger (Cindy) Hutchins, Aledo, John (Jessica) Hutchins, Kennesaw, Ga.; 12 grandchildren; five great-grandchildren. She was preceded in death by her parents, husband and two brothers.