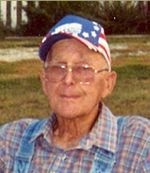 LaVern "Pete" Anderson, 86, of Viola died Saturday, Jan. 17, 2009, at Mercer County Hospital, Aledo. Graveside services are 2 p.m. Wednesday at Viola Cemetery. Visitation is 4-7 p.m. Tuesday at Dennison Funeral Home, Viola. Memorials may be made to Viola Threshers Reunion. He was born July 14, 1922, in Alpha to Gustaf and Ella Swanson Anderson. He was raised in the area known as Kristdala in rural Woodhull. He married Maxine Weidner Sept. 9, 1945, at Church of Peace, Rock Island. Pete started farming at a young age and continued to farm and work at John Deere Plow Planter. He retired from John Deere in 1983. Mr. Anderson always had enjoyed collecting antique stationary engines and restoring them. He often could be seen with his engines running in the yard while having a cup of coffee. Survivors are his wife, Maxine Anderson, Viola; daughter, Colleen (Dave) Moore, Viola; sons, Mike (Pam) Anderson, Lynn Center, and Jerry Anderson, Viola; a grandson, Chad (Jenny) Anderson; and three great-grandchildren, Abigail, Ethan and Eli Anderson; a sister, Margaret Sims, Rock Island; and several nieces and nephews. He was preceded by his parents and sisters, Evelyn Anderson and Gladys Holtman.