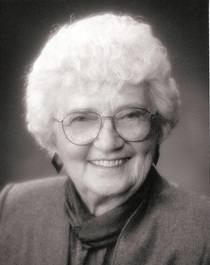 Lauretta was born March 23, 1918 in Delmar, IA, daughter of Albert and Nellie Blunt Meinke.  She married Charles Elsey, then later married Ernest L. Thompson on August 8, 1944 in Galesburg, IL.  He preceded her in death on June 7, 1995 after 50 years of marriage.  Also preceding her in death were her parents, an infant daughter, two brothers, two grandsons, and a granddaughter.

Lauretta was employed by the Winola Schools as a cafeteria manager and later as the district dietician, starting in 1959 and retiring in June 1983.  There she made many lasting friendships among the staff and students.  After her retirement, she enjoyed taking care of her husband, home, yard, and spending time with her family and her friends.

Funeral services will be Tuesday, Sept. 30 th at 2:00 p.m., with visitation 1 hour prior, at Viola United Methodist Church.  Burial will be in Viola Cemetery.  A reception will follow at the church.

Memorial contributions may be made to the United Methodist Church of Viola or the American Heart Association.

Condolences may be offered online at www.dennisonfuneralhome.com.