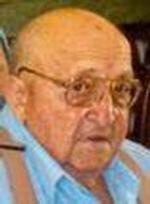 Kenneth E. Brokel, 85, of New Boston, Illinois died Thursday, August 25, 2011 at Mercer County Hospital, Aledo. Funeral service is 10:00 a.m. Monday, August 29 at Dennison Funeral Home, Aledo. Burial will be in Eliza Creek Cemetery with graveside military rites. Visitation is Sunday, August 28 from 5:00 - 7:00 p.m. at the funeral home. Memorials may be left for Mercer County V.F.W. or Eliza Creek Cemetery. Kenneth Edward Brokel was born March 17, 1926 in Cedar Rapids, Iowa, the son of Edward and Bessie Franta Brokel. A 1943 graduate of Joy High School, he went on to serve in the U.S. Navy during World War II in Asiatic Pacific. On March 28, 1947 he married Mary Bell in Reynolds, IL. She passed away in 1987. Mr. Brokel was a farmer. He was a member of Eliza American Legion Post 1971 and Mercer County V.F.W. Post 1571, where he had served as Past Commander. Proud to have had the opportunity, Kenneth attended one of the Honor Flights of the Quad Cities. He is survived by 2 nieces and a nephew and special friend, Florence Fullerton, Viola. He was preceded in death by his parents, wife and sisters, Mary Cook and Helen Gunnell.

To order memorial trees or send flowers to the family in memory of Kenneth Brokel, please visit our flower store.