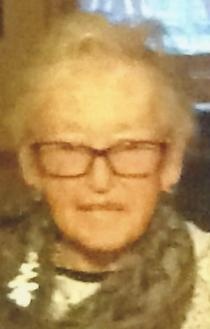 Joyce Curtis, 80, of Oquawka, Illinois was at home, surrounded by her family, as she passed away on Wednesday, January 20, 2016.

Funeral Mass will be 2:00 p.m. on Saturday, January 23rd at St. Catherine’s Catholic Church, Aledo.  Burial will be in Aledo Cemetery.  Recital of the Rosary will be 5:30 p.m. on Friday, January 22nd, followed by visitation from 6:00 – 9:00 p.m., at Dennison Funeral Home, Aledo.  Memorials may be left for St. Jude’s Children’s Hospital.

Joyce was born May 4, 1935 in Boise, Idaho a daughter of Cleveland and Grace Crawford Petet.  On April 28, 1951, she married Terry W. Curtis, Sr. in Davenport, Iowa; they were married until his death on September 30, 2009.  She worked a few years as a cook and CNA, but most of her life was spent as a stay-at-home mom and homemaker.  Joyce was a member of St. Catherine’s Catholic Church, Aledo, and often attended ICC in Monmouth.  Among the horse show community, she was famous for taking times at events.  She was a member of Green River Wranglers Saddle Club.  In her spare time, she enjoyed reading and sewing.  Her greatest love, was spending time with family, especially her grandkids.

She was preceded in death by her parents, husband, son: Roger Dean Curtis, grandson: T.J. Price and brothers: Bill, Tom and Ron Petet.

To order memorial trees or send flowers to the family in memory of Joyce Curtis, please visit our flower store.