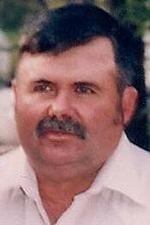 Joseph Bernard Barnes, 57, of Preemption, Illinois died Saturday, September 24, 2011 at his home. Funeral services are 11:30 a.m. Wednesday, September 28, 2011 at St. Anthony Catholic Church, Matherville with visitation from 10:00 - 11:00 a.m. Burial will be in St. Joseph Cemetery, rural Matherville. Memorials may be left for the family. Dennison Funeral Home, Viola is handling arrangements. Joseph was born February 16, 1954 in Aledo, Illinois to Bernard James and JoAnne Hartman Barnes. On May 22, 1982 in Boden, he married Debbie Hays. In his younger years, he was in rodeo and also traveled and worked with Clydesdale horses. Over the years, he farmed, had worked as a delivery man and ran heavy equipment for Watts Landfill. An avid outdoorsman, he loved to hunt, fish and camp. He also enjoyed playing the guitar. Joe was a member of St. Anthony Catholic Church. Those left to cherish his memory are his wife: Debbie Barnes, Preemption; daughter and son-in-law: Erica and Eric Alexander, Rio; son and significant other: Bill Barnes and Courtney Turner, Millersburg; grandson: Grant Alexander; mother, JoAnne Barnes, Sherrard; sister and brother-in-law: Catherine and Neal Rice, Viola and 2 nieces and 3 nephews. He was preceded in death by his father.