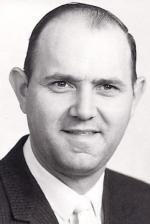 John D. Adams, 82, of Matherville, died Tuesday, Jan. 11, 2011, at Mercer County Hospital, Aledo. Funeral Mass will be 10 a.m. Friday, Jan. 14, at St. Anthony Catholic Church, Matherville. Burial will be at St. John Cemetery, Viola. Visitation is 4-7 p.m. Thursday, Jan. 13, at Dennison Funeral Home, Viola, with a rosary recited at 7 p.m. Memorials may be made to St. Anthony Catholic Church He was born Aug. 28, 1928, in Wanlock, Ill., son of John M. and Mary M. Mehall Adams. His father worked at the Brick Yard in Shale City.When he was 6 months old, the family moved to Matherville.He learned to speak, read and write the Slovak language from his Grandmother Anna Mehall.He was also fluent in Croation and Polish.He went to Matherville Grade School and graduated from Sherrard High School. He also attended St. Ambrose College, Davenport, for two years. He made three trips to Slovakia to visit relatives and in 1968, he also took his mother. John worked at Farmall Works for several years and then spent two years in the Army during the Korean War.Coming home he ran Adams Tap, in Matherville, for 50 years upon the death of his father, who started the business in 1934. John was a member of Eagles Lodge 2019, Knights of Columbus 3rd and 4th degree Honorary Life Membership Monmouth, National Slovak Society and Croation National Lodge.He was a member of St. Anthony Catholic Church all his life. He is survived by a sister, Therese (Ron) Kipling, Seaton and Marietta, Ill.; nephew and nieces,Fred Carlson, Seaton, Susan (Dave) Morrison, Carlinville, and Chris (Jim) Holmes, Joy; several great-nieces and -nephews. He was preceded in death by his parents.