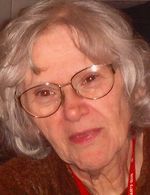 Joan M. Eckert, 78, of Silvis, formerly of New Boston, died Saturday, Oct. 27, 2007, at Genesis Medical Center, Illini Campus, Silvis. Services are Monday, October 29, 2007 at 12:00 p.m. with visitation one hour prior to services at Dennison Funeral Home, Aledo. Burial is in New Boston Cemetery. Memorials may be made to New Boston United Methodist Church. Joan Schlimmer was born on Jan. 11, 1929, in Davenport, and was raised by her mother, Mable Schlimmer. She married Jack Donovan Eckert Feb. 11, 1950, in Rock Island. He preceded her in death on March 23, 1995. She graduated from Rock Island High School then attended business college. After college she worked for Hickey Bros. Inc. in Rock Island. Later she worked for several years at the New Boston grocery store baking pastries and desserts. She also was a cook at the New Boston Grade School. Mrs. Eckert enjoyed sewing, needlepoint and cooking. She was a member of New Boston United Methodist Church and Order of the Eastern Star Chapter 126, Aledo. Survivors include one sister, Mary Lu Oldsen; brother-in-law and sister-in-law, Robert H. and Grace P. Eckert; and a number of nieces and nephews all in the Quad-Cities area. She was preceded in death by her parents; husband; daughter, Linda "Beaner" Tompkins; two brothers-in-law and one sister-in-law.