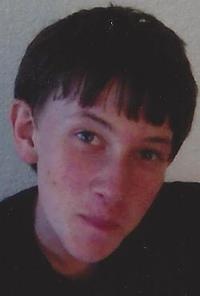 Jesse Bullock, 12, of rural New Boston, Illinois died Friday, July 19, 2013, along with his brother Nic Bullock, in a drowning accident near Mannon, Illinois.  Their cousin, Jamie Vermast, saved their little brother, Thomas and tried his hardest to save the other boys…the family thanks Jamie for his efforts.

Funeral services are 3:00 p.m. on Wednesday, July 24, 3013 at Mercer County Intermediate School, Aledo.  Visitation is also on Wednesday from 11:00 a.m. until 2:30 p.m. at the school.  Burial will be in Mannon Cemetery.  The family request that memorials be left for the New Boston Boy Scouts or to the family.  Dennison Funeral Home, Aledo is handling arrangements.

Harland “Jesse” was born September 16, 2000 in Iowa City, Iowa, a son of Jesse and Emily Foster Bullock.  He would have been a 7th grader in the Mercer County District this year.  Jesse was artistic, he enjoyed drawing and music.  He loved riding on the four-wheeler or dirt bike.  You could also find him either playing Army or involved in video games.  He was a member of New Boston Boy Scout Pack 406.

To order memorial trees or send flowers to the family in memory of Jesse Bullock, please visit our flower store.