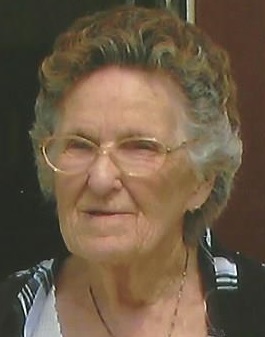 Funeral services will be held at 11:30 a.m. on Thursday, March 22nd at Norwood Presbyterian Church of rural Alexis.  Visitation is from 10:00 a.m. until the time of service at the church.  Irene will be laid to rest in Norwood Cemetery.  Serving as pallbearers are Matt Tennyson, Tom Swanson, Tony Tharp, Joe Willenborg, Steve Gregory and Jeff Gregory.  Memorials may be left for Norwood Presbyterian Church or Norwood Cemetery.

Florence Irene was born August 20, 1918, in rural North Henderson, Illinois, the daughter of James Arthur and Beulah Selman Brown.  The family moved to Monmouth where she attended the schools there and graduated with the Monmouth High School class of 1936.

In 1938, Irene married Robert H. Edwards of Alexis in Burlington, Iowa.  They farmed for a number of years in the Norwood community.  After Bob retired from farming, they moved to Alexis in 1995.

Irene was baptized and joined the Ninth Avenue United Presbyterian Church.  Later she transferred to the Norwood Presbyterian Church of rural Alexis where she was an active member serving as Sunday school teacher and youth advisor, on the Women’s Association, and was an ordained elder.  She also served on the former Rock River Presbyterial Board.  She was a past matron of the Sisters of Charity Chapter of the Order of Eastern Star and belonged to the Alexis Women’s Club and several neighborhood clubs.

Irene loved time spent on the golf course and playing cards.  She and Bob loved to travel.  They had visited Mexico, Canada, the Bermudas, and all fifty of the United States.  She especially loved Alaska.  They spent many winter months in Mesa, Arizona, with their friends on T Street.

Irene was preceded in death by her husband, parents, sister Beverly Ehlen of Monmouth, Illinois, and her brothers Kenneth Brown of Lomax, Illinois and Richard Brown of Bushnell, Illinois.