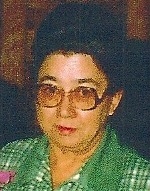 Graveside services are 10:00 a.m. Tuesday, July 7th at Rock Island National Cemetery.  Those wishing to attend services should gather at the iWireless parking lot at 9:45 a.m. to proceed onto the Arsenal.

Ilene Jeanette Redman was born June 7, 1928 in Moline, IL a daughter of Emil and Jenny VanLoo Redman.  On August 29, 1948, she married Phillip Harold Benton in Milan, Illinois.  They were married until his death on April 26, 1999.  Ilene was a mother and homemaker.  She had worked at Two Sisters Restaurant in Milan.  She was a member of Milan V.F.W. Ladies Auxiliary.  Ilene loved working outdoors, tending to the garden and flowers.  She was a very good cook, her family will miss her meals.

She was preceded in death by her parents, husband, infant daughter Phyllis, daughter Patty and brother Emil Redman, Jr.

To order memorial trees or send flowers to the family in memory of Ilene Benton, please visit our flower store.