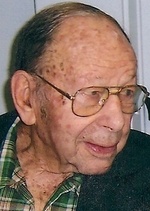 Funeral services are Thursday, March 1, 2012 at 11:00 a.m., with visitation 1 hour prior, at Dennison Funeral Home, Viola.  Burial will be in Farlow Grove Cemetery, Matherville.  Memorials may be left for the Community Church of Matherville.

Mr. Burdick worked as a machinist at the Rock Island Arsenal for many years, retiring in 1972.  He served in the Army during World War II.  He was an avid outdoorsman, loving to duck hunt, fish and care for his Labradors.  He was a member of the Community Church of Matherville, Matherville Eagles, NRA and Ducks Unlimited.

He was preceded in death by his parents, wife, 2 grandchildren, 2 brothers and a sister.