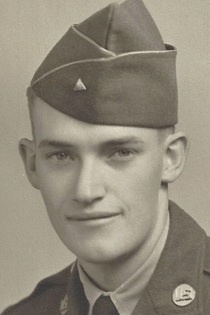 Graveside services, with Military Rites, will be 11:00 a.m. on Tuesday, February 21st at Viola Cemetery.   In lieu of flowers, memorials may be left for Honor Flight of the Quad Cities.  Dennison Funeral Home, Viola is assisting the family.

Herbert Lee was born November 21, 1918 in Aledo, Illinois the son of Hjalmar and Mary Anderson Clauson.  Herb was baptized and confirmed in the Lutheran faith.  He graduated from Community High School, Reynolds, Illinois.  Herb worked for his father on the family’s 220 acre dairy and grain farm located between Reynolds and Matherville.  On January 26, 1942, at the age of 23, he enlisted in the United States Army.  He served with the 707th Tank Battalion in northern France, central Europe and Germany.  He was honorably discharged from the Army on October 17, 1945.  After the service, he moved back to the farm and continued farming with his father.  During that time he met Ida Hanson, the two were united in marriage on June 1, 1947.  In 1948, he and Ida moved to Rock Island and he began working at John Deere.  The couple adopted their daughter, Brenda Sue, at the age of one.  Herb worked at John Deere just shy of 33 years, retiring on January 31, 1981.  In 1984, Herb and Ida left Rock Island to retire in Viola, Illinois.  His wife, Ida, passed away on February 11, 2003.  Herb was very proud of his military service.  He was a life member of the American Legion, V.F.W. as well as the 7th Armored Association.  He had the honor of being part of one of the Honor Flights of the Quad Cities with trip companion, Beverly Wassenhove.   His daughter, Brenda, was active with Native American history and through her, Herb became involved also.  He was adopted by the Black Fox Drum out of Galesburg as their head veteran.  As Herb’s health declined, he moved to Genesis Senior Living in Aledo.  On May 18, 2016 his daughter passed away, leaving Herb as the last of his family.  He is now reunited with his beloved, Ida and Brenda.

Those left to cherish his memory are a niece, Marlene Hardy of Peoria, AZ and Ida’s nephew, Ray Hanson of Osco, IL and nieces, Margo Schillinger of Geneseo, IL, Pauline Nyboer of Harrison Township, MI, Chris Ward of Geneseo, IL and Sharon Hoagland of Moline, IL.  We thank all at Genesis Senior Living, who cared so compassionately for our uncle since July of 2015.

To order memorial trees or send flowers to the family in memory of Herbert Clauson, please visit our flower store.